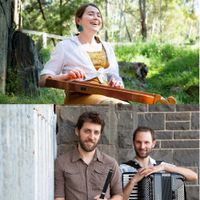 Lucy Wise Lucy Wise’s whimsical contemporary folk sound has won the hearts of audiences across Australia, NZ, the USA and the UK. She explores themes of love, the natural world, friendship and healing with disarming honesty, and accompanies her stunningly pure vocals with fingerpicked guitar, ukulele, and Appalachian dulcimer. At this concert Lucy launches her new single, The Basket, from her upcoming fourth album. “Wise is a natural storyteller…you can almost feel the dusty earth crunch beneath your feet as she sings.” - The Brag.

Evan & Mischa Evan Davies & Mischa Herman, both talented multi-instrumentalists, explore traditional Irish, Breton and American Old Time music. The duo bring together flute, accordion, guitar, whistle and banjo to create unique arrangements of traditional tunes and their own twisted compositions which are sure to raise some eyebrows! Their debut EP was released to critical acclaim: "Not often do I come across musicianship on traditional instruments at this level. Florid runs amidst gorgeous tones and pulsing rhythms, this music is sure to lift the soul." - Anthony Norris.